The project is located in Beijing Dongcheng District, surrounded by alleyways full of a strong and old Beijing life style. The client is a newly founded law firm, with a group of spirited young people.

Before transformation, the whole quadrangle is composed of two rooms in the north and south. The entrance is open on the west wall. Outside of the east wall is another quadrangle. There are two open courtyards and two fruit trees in the quadrangle. The courtyard between the north and south rooms is larger, and those two fruit trees are crowded in this courtyard. The other slit courtyard is carved out on the south edge of the south room.

The site is tight, the original walls, columns, outdoor courtyards divided the entire space into pieces. In winter, it would be very inconvenient to shuttle between indoor and outdoor. Therefore, the most intuitive design decision is to integrate the two rooms and two courtyards into a continuous interior space.

Apart from preserving some outdoor space at the entrance, the two courtyards were incorporated into the interior through an additional glass ceiling. The design of the glass ceiling ensures sufficient natural light into the interior. With the existing skylight in the south room, the three natural light sources form a north-south axis, which becomes the basis for establishing the core indoor public space. Three movable partitions are arranged along the axis. The partitions provide a series of different size spaces and different lighting qualities, allowing different modes of occupation. Two of the most important negotiation spaces in the law firm are prioritized at both ends of the axis, which not only ensures the privacy of the negotiation space, but also enables them to have their own light source. In addition, the office area also benefits from the enlarged interior, it occupies the entire east side of the quadrangle and becomes a continuous and integrated functional zone.

The small pomegranate tree on the west side and the big jujube tree on the east side of the courtyard were retained in the reconstruction. The direct opposition between the two trees made the narrow courtyard tenser. Designers separated these two trees by a series of glazing with different transparency. From the entrance to any work seat, one&rsquos sight changes as the body moves. Entering the west gate and bypassing the frosted glass, one enters the hall and sees the big canopy of the jujube tree through the glass ceiling. After bypassing the suspension of the translucent glass box of partition, one finally comes to the opening work space. Occupying the key seat, the jujube tree trunk guides one&rsquos view to the outside and into the sky.

The client hopes to create a sense of intimacy for the office, and the existence of two trees undoubtedly provides important reference for this scale: the big tree shelters the home, and small trees exists as a piece of furniture. Although the quadrangle had changed its owners and been transformed several times, the jujube tree and the pomegranate tree are the most long-term guardians that have witnessed the history of the courtyard.

Today, the scale of the entrance matches the size of the pomegranate tree, and the location of the jujube tree is at the core of the open work space. These new functional spaces are arranged around the trees, yet the perception is that the trees have been carefully placed at the right &quotposition&quot. Trees are thus endowed with a sense of life related to people, and people take the trees to become a member of their work and life.

Although the courtyard is incorporated indoors, the trees are still &quotwild", yet they could be perceived from inside. The pomegranate branches at entrance, the pomegranate tree behind the frosted glass, the jujube tree canopy through the glass ceiling, the jujube tree trunk behind the translucent glass box, or the leaves and fruit fallen on the glass ceiling. All this that have been captured by building or the eyes, becomes poetry to the rigorous workplace. Therefore, it is called Pavilion Green. 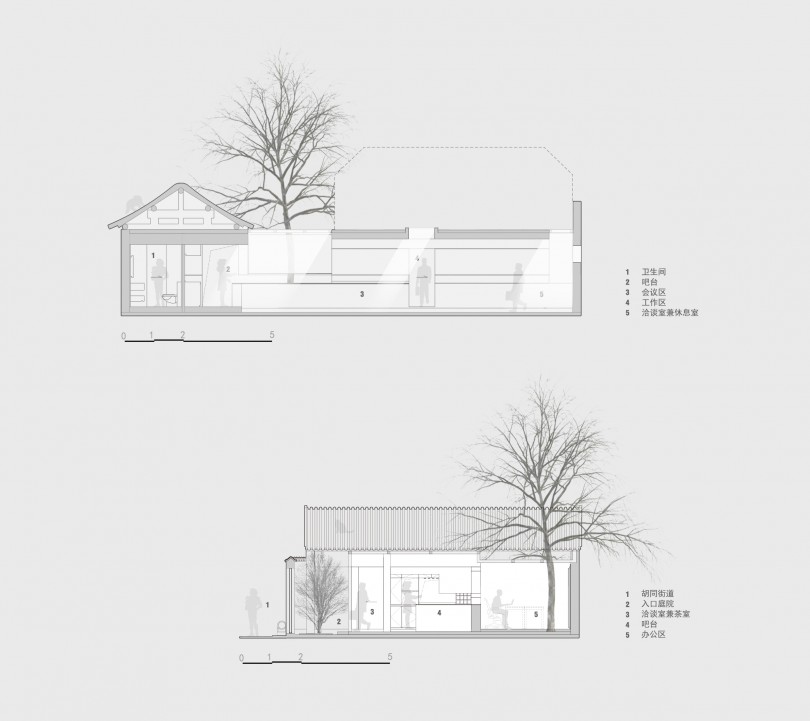