A family is looking for a new home able to represent their trips around the globe, their desire to live in a garden and to embody the cinematic diversity of domestic life. The result is the design of two different houses on the same plot. The Tobogan House is a generic three-storey house on a southern slope. The project juxtaposes two houses and a void that houses a car park, an entrance and two staircases, working as a thermal regulator and constructing a tracking shot between a garden, a folie and a picturesque grotto while crossing through the lounge, sauna-fitness center, bar, dining room and kitchen. One of the houses is organized to inhabit the soil with its habits and routines. The other was made light-heartedly, emancipated from the ground, in the air, is flying at a double height over the garden. Both are totally different each other in materiality, shape and weight. The most important spatial interest of the complex is the heterogeneous, ambiguous and membranous space that appears between the two houses. The scenic load of this space is achieved through the exposure of domestic life circulating between floors. The ground floor is contained between two long concrete walls. These walls cut into the soil to accommodate two ‘conventional and modern’ volumes, connected by a corridor surrounding the empty greenhouse-stage. In the South there is a garden for “the Good Life”, to the North lurks the “Grotesque Garden” — in the middle is the promising double height greenhouse. Over this green sequence along the plot, a smooth surface, based at ground level, lets  Nature to cross over the slab and the car to pass through one side to the other over the dining-kitchen area. The upper floor is formed by wrapping three empty cylinders with corrugated iron, curtains, air and mirrors. Inside the cylinders inhabit the “super-interior”, offering total privacy to 9 rooms padded with wood, cotton, linen and silk, surrounded by “souvenirs”.

The house that is underneath is a "Modern House" more properly based on The Morris Greenwald House of Mies van der Rohe. The dimensions and proportions started with this and then the construction and the changing needs of the client modified some aspects and dimensions. But the T-module of the service piece is maintained and repeated as you can see in the plans, either in the underground plan or in the first level.

Finally two rectangles maintain the spirit of modernism by Mies. This one is constructed in concrete to preserve the heaviness, address the needs to support the lateral loads of the soil, and make use of thermic inertia to control the environmental reaction of the season weather changes.

The Floating house is emancipated from the soil, gravity, or the earth. It has no relation with it. The cylinders are reinforcing this aspect as it reduces the interchange surfaces with the exterior. The cylindric object could be here or any other place. In opposition to the underneath level, this space which is enclosed by membranes reinforces the idea of the interior and connects it with the exterior by windows, but also maintains a distance with the ground condition as a floating thing.

We could say that the only new proposal on this project as an architectonic matter over the disciplinal heritage is the action represented by wrapping the three tangent cylinders connected by a continuous skin, enclosing an interior which is organized by the orthogonal grid of the Morris House of Mies. This skin is designed as a membrane made by multiples layers which wants to breathe by representing the surrounded environment: sun radiation, light as a fluid, and the impact of the noise over the building which is coming from the highway and a school. So the aluminium micro-perforated panels are useful to decrease  and reducing the radiation received and reflected, to break the impact of the noise over the building and to reduce the radiation received and reflected; the Mirror is working to decrease the impact of the sun radiation and to conduct the light as a fluid reflected by the mirrored edges of the windows. 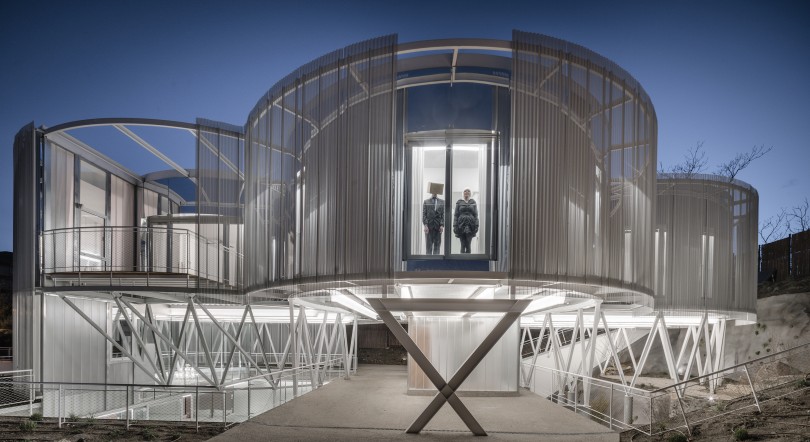 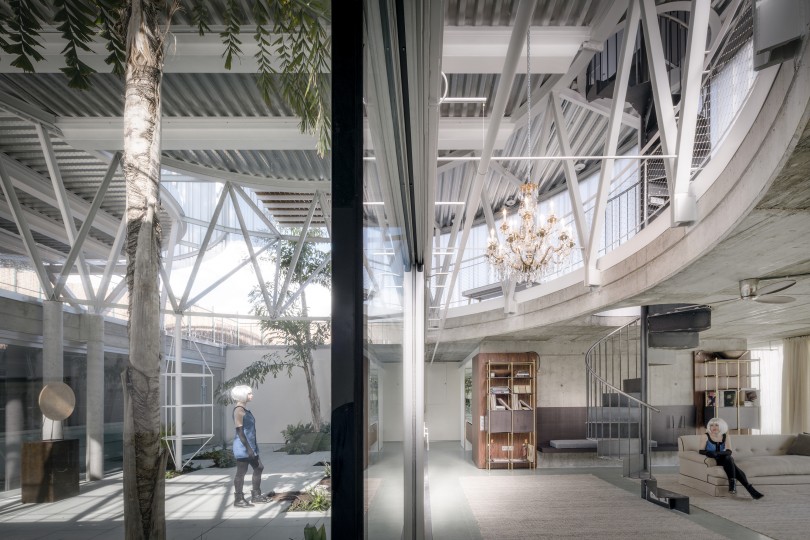