The House of Memory lies at the centre of an important network of public spaces and facilities, including the new headquarters of the Region of Lombardy, the Riccardo Catella Foundation, the Incubator of the Arts and soon the new park of the “Library of Trees”.

Within this network, the House of Memory operates as a point of exchange or a place for public debates: the building does not only testify to the struggle to obtain freedom and democracy, but also performs as a platform for the latter’s everyday exercise.

The extreme simplicity of the proposed scheme allows for a maximum flexibility of the building’s internal organization, which can adapt to the ever-changing needs of a contemporary cultural institution. The House of Memory will be the centre of a system of places of memory at the scale of the whole city, offering information about those places and providing a shared multimedia infrastructure available to all the “institutions of memory” scattered throughout the city.

The House of Memory is a very simple building: it is a box with a rectangular base of 20m by 35m and 17.5m high.

The building is divided into three parts that are connected to one another by an entirely open ground floor. Two thin layers along the building’s shorter ends house the archive (South), the restrooms and technical installations (North), and the vertical circulation. The open space at the ground floor is subdivided in three parts by two octagonal columns. One third of this area reaches the building’s full height and includes a spiral staircase. The rest is occupied by exhibition spaces and offices disposed on three levels. This internal organization – with the enormous, yellow staircase inserted between the three levels of offices and exhibition spaces and the five levels of archive – introduces a greater scale into the building. The contrast between the tight levels of the archive and the colossal dimension the staircase allows the office and exhibition spaces to acquire spaciousness; the visitor perceives a vaster, more generous atmosphere.

The yellow staircase is not only the building’s main distributive element, but it is also the device that establishes a relation among the visitors and the collection. Given that the preciousness of the archive does not allow the visitors to directly access to the documents, the relationship between the citizens and the collection is established through the rotating movement created by the staircase. The visitor repeatedly comes closer to and then moves away from the collection, thereby experiencing a complex sequence of views of the documents and, behind them, of the park outside.

Light enters the building in many fashions. The offices have large windows concentrated in the corresponding parts of the façade. The building’s open-space configuration and internal subdivision with glass emphasize the abundance of light. The entrance hall, the large staircase and the ground floor receive light from a handful of very large openings; grazing light invades the semi-darkness and generates a calm and solemn space.

The House of Memory is made of very simple materials, both inside and outside.

The reinforced concrete beams and pillars follow a square grid, with a span of 10m. The circular stair is in reinforced concrete. The ground floor pavement is in polished concrete. It is replaced with linoleum on the office levels. The partitions between the offices are made of glass panes from pavement to ceiling. All offices are organized as open spaces around a core of more private spaces and meeting rooms. The simplicity of the scheme allows the different associations to select the office layout they prefer and also allow them to share services among different offices, so enhancing the co-operation among institutions and thus reducing expenses.

The House of Memory is an extremely compact building. This shape involves a significant reduction of the construction and maintenance costs, limiting the amount of external surfaces with respect to the overall volume of the building. The compactness of the building and the limited amount of glass surfaces also provide a great thermal capacity, that contributes to the overall energy saving. The external walls’ considerable thickness (45 cm) reduces the energy losses. The extreme simplicity of the constructive solutions chosen throughout the building (raw concrete pillars, exposed installations) allowed maintaining extremely low construction costs (around 1400 €/sqm).

The façades of the House of Memory are entirely realized in bricks and combine a frame made of pilasters and architraves in slight relief with large recessed panels decorated with images in six tones. These large panels are subdivided in nineteen squares with portraits (4.6 x 4.6m) and eight large rectangles with historical scenes (9.6m in height and with variable width). The polychrome bricks, in a range of six different colours, have been especially produced to specific dimensions (5.5 x 5.5 x 12cm) by SanMarco SRL.

The images are elaborations on the base of archive photographs. Details within the photographs have been cropped in order to match the façade panels’ proportions. These portions of photographs have been then reduced to a number of pixels equal to the number of bricks contained in the panel and then processed and subdivided in six colours, so that to each brick in the façade panel would correspond to a pixel of the elaborated image. The result of this process was a matrix with numbers from 1 to 6 (corresponding to the different colours of the bricks). The matrix has been later printed and applied onsite (in scale 1:1) in order to precisely guide the disposition of the bricks. 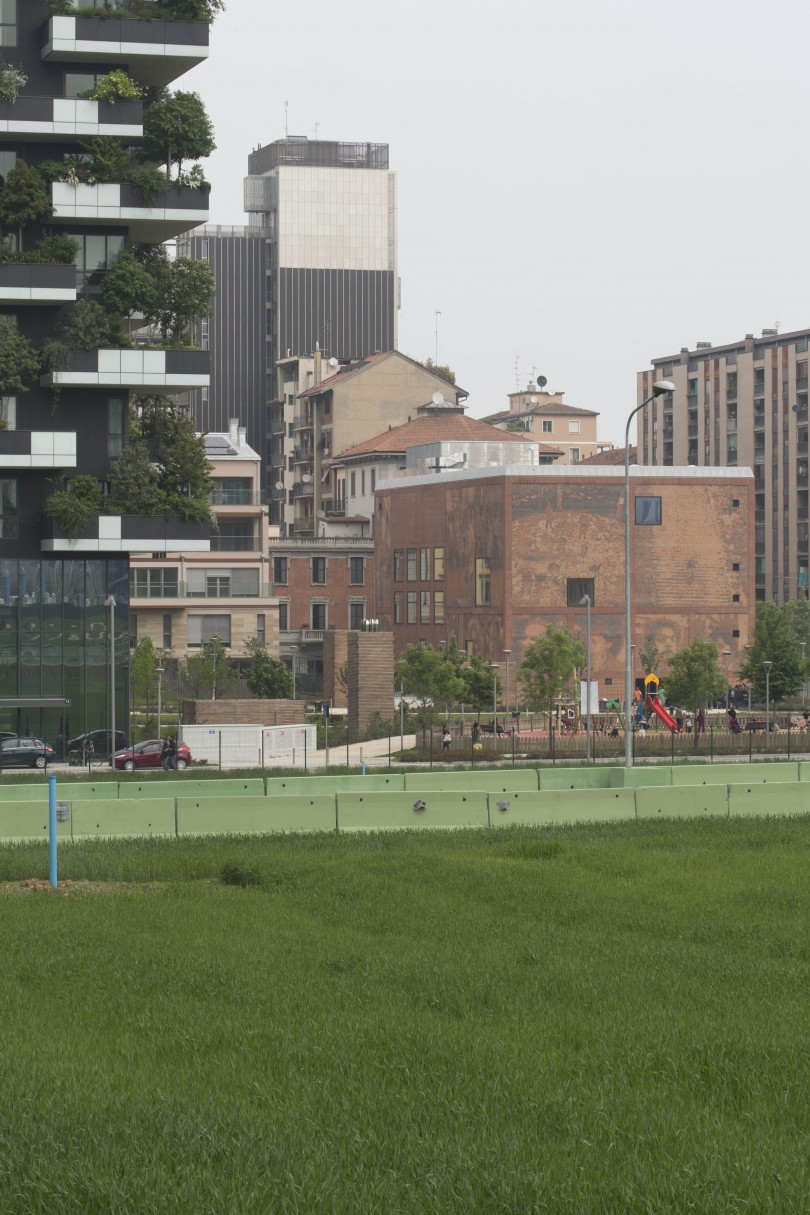 Polyptich: The relationship between memory and the House of Memory is not one of direct translation. Contemporary Milan does not possess a stable, entirely shared memory, ready to be carved in stone without further interrogation. Rather than considering the House of Memory as an expression of shared memory, we preferred considering it as a tool for discussing the different elements that coexist within the collective memory of the city. The House of Memory tries to provide a shelter for the various and varied memories that are woven not only into contemporary society, but also in the minds of individuals. Firm, long-term memories thus coexist inside all of us with our own fleeting, delicate memories; public memories go hand in hand with private ones; explicit memories cannot be separated from unconscious ones. The House of Memory is entirely covered with large images depicting Milan’s recent history. The shell of the new building is understood as a contemporary polyptych: this collection of images tries to suggest with great immediacy both the complexity and the ideal unity of Milan’s collective memory. The decorated façade, more than defining a shared memory, exposes the need for such sharing. For this reason the images collected on the envelope of the House of Memory are at the same time explicitly monumental and deliberately fragile. In fact, given their construction, the images appear more clearly from afar and then they lose clarity by coming closer. They dissolve into a sort of floating dust, as if they would finally be unsure about the very same truth that they so proudly accepted to expose. The iconographic program, carefully defined by a Scientific Committee, is made of nineteen portraits of anonymous Milanese citizens, which suggest the multiplicity of the populations that animated the city in the post-war period, and of eight historical images which record eight moments in the recent history of the city such as the deportation to concentration camps, the Liberation from Nazi-Fascism, the piazza Fontana bombing of 12 December 1969. This exterior decoration in polychrome brickwork establishes a direct relation with the Lombard tradition of buildings such as the Ospedale Maggiore and Santa Maria delle Grazie. Styles of Memory: The idea to entrust a building with the task of preserving and transmitting memory might seem anachronistic and it is certainly problematic in the context of contemporary society. In fact, we are all quite suspicious (and not without reason) of attempts to capture memory into something as defined and irreversible as a building. And yet the House of Memory, by definition, cannot avoid testifying and so resisting in a fixed configuration over a long period. It is impossible to ignore that the House of Memory is a monument, although it operates in a society without any precise collective goals to assign to architecture. Instead of opposing this unclear condition, we imagined how to profit from it. In fact, it is precisely in this complex dimension that the potential of the new building lies: in the possibility of combining the slowness and inertia of architecture with the multiplicity and rapidity of contemporary media. Rather than awkwardly following in the footsteps of contemporary communication technologies through a medium as static as architecture (and rather than reducing the complexity of contemporary technology and media to the unavoidable immobility of architecture), we chose to underscore the potential difference between the House of Memory’s solid exoskeleton and its fluid and mutating content. The new building highlights the complementarity of material and immaterial archives: different styles of memory coincide in an object that is ready to establish a dialogue with different audiences without renouncing the possibility of providing a unified representation. Thus a permanent stage set appears alongside a changing scenery, thereby producing a machine of memory that is both complex and univocal, both slow and mutating, and both multiple and immovable. The new building profits from both its weight and its lightness. As an open and continuously updated archive, the House of Memory is ready to play host to a multitude of informal and unforeseen uses. As a heavy, compact volume, the House of Memory displays its inertia, choosing to remain a stumbling block left to hinder and repeat its own testimony.

House, Monument: The House of Memory is a house, a collective house in which Milanese citizens hope to find protection for the memories they want to preserve. Nobody inhabits this house, and in this case the word house is understood as an envelope, a protected space, or a shelter that crystallizes memory within the flow of the metropolis. The word “house” – which is far too familiar – paradoxically emphasizes the monumentality of the building, turning it into an archetype or a symbol. The House of Memory is a house, and therefore a monument. In this context, the house becomes an object to be both protected and exhibited, a treasury to be surrounded with an envelope that both defends and exposes its content.