Synched with the company’s values the space serves its inhabitants. Accordingly, the design is functional, organic, natural, real and even simplistic in some ways.

As a part of Facebooks’ networking mentality the company encourages collaborative work between employees; Open, fluid, and dynamic spaces that allow for various seating and working arrangements, unique and different encounters, transparency and change, all in an effort to enable the employees maximum flexibility that spurs spontaneity and creativity.

It is plain to see, that there is an emphasis on relating to the urban environment in which the office is located, a local cultural and social habitat that incorporates elements from the middle-eastern, Tel-Aviv and Jaffa principles, as well as the use of recycled materials. Respectively, the materials and architectural elements that were chosen were reinterpreted, yielding unique artifacts such as: window shutters from the settling Templar period converted to a shutter cladded kitchen island, the well-known ornamental tiles reintroduces as imprinted arabesques on the concrete floor, both residing in the cafeteria.

The above mentioned elements provide the restaurant a local urban feel. In another area, vintage wood panels were taken apart and reconstructed to form a library in the center of the open space. Additional local objects include old solar water heaters and gas tanks that were transformed into planters that enrich and embellish the space.

Another principle that dominates the space is bringing in the outdoors. A vertical green wall is positioned on one of the floors; it serves as a dividing partition as well as a breath of fresh air exhuming livelihood to all passerby.

One of the feature components in the space is the stairwell. The staircase is composed of steel and the rail of metal mesh net, a material that was very popular in Tel-Aviv’s past construction. The wall of the stair shaft entails in it (throughout the four floors) a custom made artwork by Israeli artist FALUJA. The art integrates colorful arabesque graphics and various wooden elements that create a harmonious three dimensional visual.

Nowadays the employees enjoy an open, well-lit and functional workspace; its main goal is to serve the personnel and grant them diverse seating and working areas. The materialistic aspect was inserted into local artifacts that were reinterpreted and reinstated as elements of design, combining colors and textures that capture the eye and warm the heart. 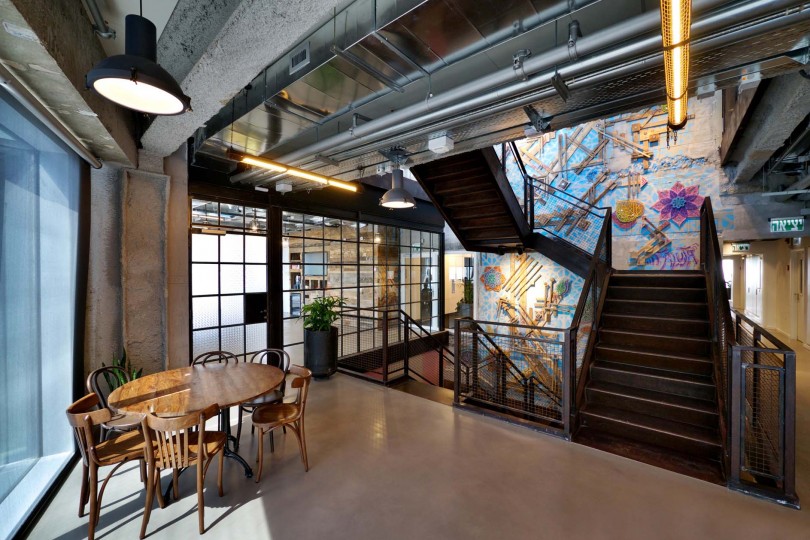